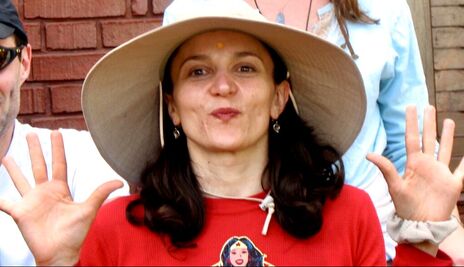 Working with Worldwide Orphan Foundation
In July of 2019, Antoinette was one of the Master Teachers, teaching GAMES for the Teacher Development Program with the National Alliance of Acting Teachers.  This program provides a rare opportunity for established acting teachers and professional actors interested in teaching to return to the classroom under the guidance of masters of the field.  This summer, she also taught a Master GAMES class to the talented teens in the YORK! Musical Theater Training Program.

At The Actor’s Center, she most recently led members in “Go! The Kinetics of Creating Through Play”, a workshop devoted to creating viscerally, emotionally present theatre inspired by the fundamental elements of play. Through improvisation, games, and exercises that aim to cultivate creative imagination, expand physical and emotional vocabulary, and develop courage for the stage, Antoinette guides participants through a process of creating original work from a place filled with joy, a spirit of generosity, an appetite for risk-taking, and a healthy sense of humor.

Working with Worldwide Orphan Foundation
Antoinette co-directed and co-created a theatrical piece with 40 HIV+ orphans, ranging in age from four to fourteen in Addis Ababa, Ethiopia through Dr. Jane Aronson’s Worldwide Orphans Foundation. The performance took place May of 2006 at The National Theatre of Ethiopia to a standing-room only crowd which included members of the Clinton Foundation. Antoinette and her creative colleagues (James Hallett, James Haven and Lisa Rothe) were sent by the Worldwide Orphans Foundation, founded by Dr. Jane Aronson, who is also known as the “Orphan Doctor”. The experience was inspirational, life-changing and filled with a tremendous amount of love and generosity. Her journals of the experience were published in the Teaching Artists Journal (TAJ.)

Antoinette was also an adjunct Professor at NYU’s Graduate Acting Program for seven consecutive Fall semesters and directed the 1st years’ January GAMES project. At NYU Grad, she taught Theatre Games and co-founded with James Calder, the advanced workshop, “Kinetics of Literature,” which challenged actors to create visceral theatre inspired by great literature, movies and art. She co-founded NYU’s Alumni Lab in which she and James Calder worked with NYU’s Graduate Acting alumni, helping them to create and work on original material. Antoinette also co-taught and co-directed NYU undergraduate theatre majors in the basics of Commedia dell’Arte with James Calder at La Pietra (NYU) in Florence, Italy.  At New York Institute of Technology, she taught undergrads “How to Direct Actors.”

Antoinette has also taught various classes at J. Michael Miller’s The Actor’s Center where she was a Teaching Fellow. Her independent Improvisation workshops include teaching at Chamber Music America’s 2002 national conference, teaching master classes to high school students from across the country and teaching LGBTQ senior citizens as a visiting artist at SAGE in Astoria, Queens. Antoinette’s one-on-one coaching includes working with actors in the Broadway production of ENCHANTED APRIL on Italian dialects, and also coaching actors preparing to audition for graduate programs and professional employment.

Antoinette is a Drama League Directing Fellow which provided her the privilege of assisting Jerry Zaks on the Broadway revival of THE MAN WHO CAME TO DINNER starring Nathan Lane.  And directed a number of staged readings at the Lark.

“I wanted to send you a note to say thank you…I learned so much in your class. I'm inspired by the energy you brought to the room. You made the studio a brave space in which everyone could find their creative voice. It's fascinating how games have the power to teach rather complex principles of acting in an approachable and deceptively simple framework. My biggest takeaway from your class is the importance of authentic joy and playful generosity in the room — and that the instructor sets the tone. I hope to bring this spirit of play to my own teaching.”
​
- 2019 Student, Teacher Development Program